A recent study suggests that, if you are white, and you are presented with evidence that our criminal justice system disproportionately targets black people, then you are more likely to support harsh criminal justice policies than if you were unaware of this evidence. According to a study by Rebecca Hetey, a post-doctoral fellow in Stanford’s Psychology department and Jennifer Eberhardt, her faculty advisor, informing white people that African Americans are significantly over-represented in the prison population “may actually bolster support for the very policies that perpetuate the inequality.”

This video was recorded on September 27 and uploaded to YouTube a few days later. It has recently made the rounds on social media and caught the attention of major news outlets. In it, two Philadelphia police officers stop, detain briefly and question two young black men who are walking down the street. The reason given for the stop is that one of the young men said “Hi” to a drug dealer. You should watch the video in its entirety:

There are a number of choice quotes to be pulled from this video, my favorite among them the retort from the young man being stopped and who managed to film the incident, “You not protecting me by stopping me when I’m trying to go to work,” but it’s this exchange that has come to define the encounter:

Officer: “We don’t want you here [in Philadelphia], anyway. All you do is weaken the fucking country.”

Young man: “How do I weaken the country? By working?”

Young man: “Freeloading on what? I work.” 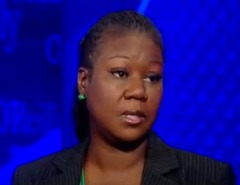 Sybrina Fulton, Trayvon Martin’s mother, spoke out Sunday against the stop-and-frisk police practice in New York City on NBC’s “Meet the Press,” according to Black America Web. During her interview on the show, she said that neither police nor civilians have the right to deem someone as suspect because of their race. The story was reported by Black America Web on Aug 18, 2013.

“You can’t give people the authority, whether civilian or police officers the right to just stop somebody because of the color of their skin.”

On the heels of a judge telling New York City that its stop-and-frisk policy was racial discrimination, New York Police Commissioner Raymond Kelly defended the use of stop and frisk and said violent crimes would increase if the practice is forced to shut down. Not surprisingly, the city plans to appeal the judge’s decision.

Commissioner Kelly, while speaking on the CBS show “Face the Nation,” said:

“The losers in this, if this case is allowed to stand, are people who live in minority communities.”

What!? Apparently, even in the face of hard evidence that the practice has no basis in any real data, he insists that it is necessary for the well-being of minorities. Well, here’s some data for Commissioner Kelly to ruminate over:

“Over the past decade, New York police have stopped, questioned and sometimes patted down about 5 million people; 87 percent were black or Hispanic. About 10 percent of the stops spur an arrest or summons. Police find weapons a fraction of the time.”

To watch the video of Sybrina Fulton’s interview, go to blackamericaweb.com.