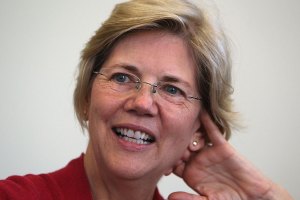 Tonight in a video posted by MoveOn.org, Senator Elizabeth Warren and author Thomas Piketty were interviewed by HuffingtonPost.com about social and political issues they’ve been speaking about and working on, such as income inequality and campaign contribution laws post-Citizens United/McCutcheon. They had some very interesting things to say, including their ideas for how to reform the many broken systems in America.

Most importantly, Sen. Warren ended the night’s event with a message to all of us that change can and will happen, and that she won’t stop fighting for reform and progress. Normally, I’d be skeptical of any politician talking about reform, but she seems to genuinely care and believe in what she’s saying, and that’s considering that she’s probably made more enemies than friends in Washington for her very progressive views and legislative efforts. It’s also quite gutsy, and risky, of her to align herself with MoveOn.org, a liberal, progressive activist organization. The fact that she’s done so suggests to me she’s serious about reform and equality.

Check out the video and leave comments on what you thought of it!