In less than a month, the Affordable Care Act’s health insurance exchanges open up in many states.  This is the centerpiece and most important feature of Obamacare.  If it fails to offer viable, low cost options for uninsured individuals and families, health care reform in America will have taken a huge step backwards.  The news so far, however, has been encouraging.  Monthly premiums appear to be running lower than expected.  Concerns about limited health insurance options in states such as Washington seem to have waned.  And, despite low overall approval numbers for the ACA, a clear majority of the public still oppose Republican efforts to defund it.

As an uninsured individual, I will be one of the first to seek health insurance through the Washington state exchange.  This blog will be updated accordingly to report my status.

The nonpartisan Kaiser Family Foundation compiled premium data from the new marketplaces in the 17 states where it is fully available and released a variety of figures showing how much consumers will pay if they choose to purchase coverage individually.

The study is among the first to show in detail what a variety of exchange-based health plans will cost people of different ages and incomes under ObamaCare — a major source of debate between supporters and opponents of the law.

Kaiser researchers looked specifically at states’ largest cities, plus the District of Columbia, and how much young adults, families of four and older couples will have to pay for nonemployer-based health coverage in those areas.

From:  Washington state health exchange gets the options board members demanded

Just over a month ago it looked like the Washington state health exchange would offer just 23 different insurance plans – and in many counties people would essentially have only one or two plans to choose from.

Now the state will have almost twice that, with 43 plans available from seven different insurance providers when the exchange launches in 2014. Many counties will have four companies’ plans to choose from, and some will have options from five or six firms. See the map above right for the latest breakdown. 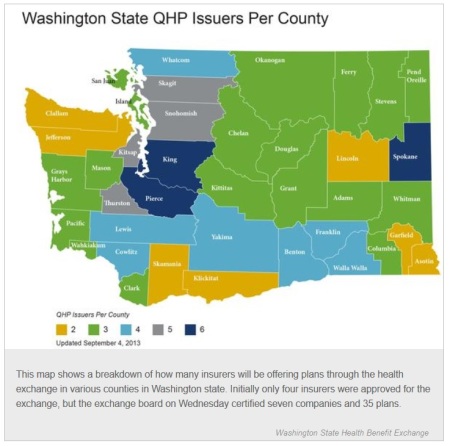 A clear majority of Americans are opposed to the Republican-led effort to defund Obamacare, a new poll shows.

Fifty-seven percent of Americans say they disapprove of the proposal to cut off funding as a way to stop the implementation of the Affordable Care Act, according to a new survey from the nonpartisan Kaiser Family Foundation.

There are clear partisan divides — six in 10 Republicans say they approve of the idea, while just 15 percent of Democrats and 39 percent of independents support it.